Sometimes You Are Hit with Completely Unexpected Obstacles 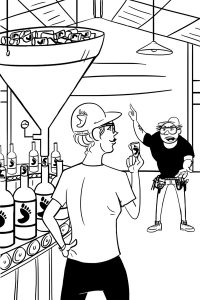 When we were watching an old British movie about the Boer wars in South Africa, there was a particular scene that stuck in our minds. Two British nobles we’re sitting in a Victorian parlor in a posh London men’s club reading their newspapers. One of them is reading an article about the war. He casually leans over to the other without making eye contact, just fixed on his newspaper and says in a very thick British accent, “I say, Rodney, have you had your brick for the day?” referring to the routing of British soldiers getting overrun in South Africa.

Your Brick for the Day

We love the expression, “Have you had your brick for the day?” so much that we made it the title of the 4th chapter in The Barefoot Spirit audio theatre. It seemed to imply that you are somehow expected to have some starling information hit you like a brick falling from the sky, as if it was a common occurrence, so you shouldn’t feel alone. We also liked the way that it imbued a type of dry British humor to an obviously adverse situation. Sometimes sarcastic humor can help you through the worst of surprising challenges.

Starting any new business is asking for surprising new challenges daily. So, “Have you had your brick for the day?” seems like an almost comforting approach to communicating something shocking you just found out about to your partner. It’s like saying, “I just found out that we’ve been breaking the law”, or, “Can you believe what we have to do now?”, or even, “Uh-Oh! That really did not work well at all…”

Part of the Barefoot Spirit, which is one of the threads of truth that weaves its way through the various scenes in the theatrical version of our audiobook, is to maintain your sense of humor at all costs! Throughout the story, it becomes obvious that the proponents encouraged this oddly lighthearted approach to adversity. They expect to ultimately succeed, so whatever form the brick comes in, it’s temporary!

At one point, Bonnie’s mother, Mabel, who left her farm in Oregon to come and help the young couple get their business started, is confronted with a conundrum. In a scene similar to what we’ve all been in at one time or another, she tries to order something that’s not on the menu. In order to get it, she has to get creative about how she asks for it. But sure enough, she gets what she wants! Please enjoy the “No Game” from the audio theatre performance!

In Chapter 4, the proponents are constantly challenged and surprised by adversity. They must keep their sense of humor while they look for ways to negotiate the daily pop-up roadblocks and rough road ahead. In fact, like most startups, they must learn while doing. Ouch!

For one thing, they wondered why nobody had ever produced a good $5 bottle of wine before. Like bricks falling out of the sky, they found out! The cost of glass, bottles, labels, capsules, corks, bottling services, cartons, shipping, taxes, and warehousing were all pretty much the same, whether your bottle of wine sells for $5 or $95. The cost of the wine varied, but everything else remained primarily the same. So, they had to solve the problem to achieve the price the market was looking for.

In order to stay in business at that price, they had to sell a lot of product, which meant they had to bottle a lot of wine. And that meant that they had to oversee massive bottlings on big machines with thousands of moving parts and tons of stuff that could go wrong. This production oversight responsibility fell on Bonnie to start with. It wasn’t what she signed up for but after a while she actually became very good at it. With every bottling came a new brick for the day. The wrong glass was delivered, or the wrong labels. The bottling line would scratch the labels or the glue was inconsistently applied, resulting in “dog ears” on every bottle. With each bottling, it was something new and different that had to fixed on the spot!

But Bonnie didn’t lose her sense of humor and on one such occasion, she even entertained the bottling line workers by playing a practical joke on the bottling line manager. In one scene, she asks him to do something that was virtually impossible. The supervisor took her seriously and blew his cool with a progressive and loud diatribe about why it was impossible, much to the delight of the workers who knew the manager was somewhat of a jokester himself.

The Cost of Sales

Most companies that make it through the startup phase go on to the build-up phase. In the build-up phase you get one or two big customers that are paying your bills and keeping the lights on. But soon enough, you realize they have you over the barrel. They know that you are totally dependent upon them and so they begin to demand lower prices and increased service. Another brick! YIKES!

Better to Not be There

When it comes to selling a consumer packaged goods (CPG) product at retail, one of the things that they learned was this: It is better to not be in the store at all (leaving open a chance of being there someday), than it was to be there and fail, thereby never having the chance of being there again!

The big chains wouldn’t take Barefoot Wine because it was unknown. So, they had to sell to every independent and every small, corner store until it was a household word. But even these mama-papa stores wanted to know if Barefoot had done any advertising. The label was radical, and neither they nor their customers had never seen it before. They were afraid to buy it, fearing it would just take up precious space on their limited retail shelf. They all threatened to discontinue it if it didn’t sell quickly!

How were they going to get the word out to make their product move in the retail stores? They couldn’t afford commercial advertising and they wondered how effective that shotgun blast approach would be anyway. Then that they got a call from far left field. A neighborhood group was looking for donations to build a park for kids after school. Michael and Bonnie had no money, but they had plenty of wine because they couldn’t sell it! So, they gave wine to the neighborhood group and told them, “Maybe you can auction it off and raise a few bucks to buy some slides and swings, or maybe you can pour it during your fundraiser, and it might loosen up some folks to write bigger checks.”

They never heard from the neighborhood group again. But Interestingly, sales took off in the stores surrounding the fundraising event. They wondered if they had discovered a new way to get the word out, so they tried it in another neighborhood and it worked! And another, it worked again! In fact, it worked so well that they used what they called, “Worthy Cause Marketing,” to grow the brand across the nation and never used commercial advertising.

The Price of Success

Finally, they had made Barefoot Wine a household word In California – in spite of the fact that the big chain stores and box stores wouldn’t touch it. They went back to the first chain store that they had presented Barefoot to, the one that refused to take it because they didn’t have a million dollars for advertising. Seeing how popular Barefoot Wine had become, the buyer eventually agreed to take it. But – wait for it – another brick! They would need a full-time National Chain Sales Manager. The buyer would only deal with a professional from the industry, not just anybody from some maverick startup.

The buyer suggested an old pro whom he had worked with in the past. It was such a blessing! He was delighted to work for the young startup, and he felt honored that they respected his experience and came to him, hat in hand, for advice. He worked with them for several years, and the rest is history. Barefoot became one of the fastest growing wine brands in the nation!

Please join us for an exciting business adventure story where actors play the parts and reenact the true story of the birth and growth of Barefoot Wines complete with sound effects and an original musical score. You will get a few laughs, thrills and chills. You can apply the takeaways in each scene to your own business! Check it out at www.barefootaudiobook.com. To your success!