WHICH WOLF WILL YOU FEED? 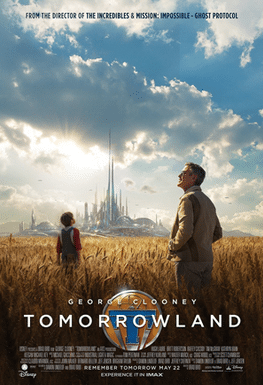 The movie “Tomorrowland” deals with a subject we think should be more common on the big screen: optimism vs. pessimism. Although it received only mediocre ratings by the movie critics, its subject matter is four stars in our book. Why? Because it’s about time for the movie-going public to hear the empowering message this movie delivers; the same message that drives most entrepreneurs and shapes the best aspects of our present and our future.

It’s also the first movie we’ve seen that challenges the status quo view of the future as necessarily post-apocalyptic, loaded with environmental catastrophes and irate aliens. And even worse, and perhaps more telling, it accuses us of embracing that dreadful future in the movies, news, and video games we indulge in, and allowing it to manifest itself through resigned apathy.

At one point in the movie, a future society has been trying to warn the present by sending images of the future consequences of their apathetic behavior. The plan is to scare the present into taking action to prevent their demise. But rather that being moved to action by these images, the people of the present accept them as a given, believe they are powerless to change them, and even embrace them. Governor Nix of the future delivers a one-minute diatribe that we feel sums up the whole movie. He tells visitors from the present that the reason folks in the present willingly accept a dreadful future is because “they don’t have to take action now” – if they just accept it.

This is a solid counter to the justification for the theme of most of today’s science fiction movies, which seems to be that horror and destruction will scare the audience into taking action. Nix says this approach has had the reverse effect. He says it’s made them pessimistic by appealing to their laziness.

The movie is aimed at a family audience, with children and pre-teens as its heroes. It is also a great audience for this important message. These impressionable young peoples’ view of the future is being influenced by video games, movies and the news. What they see is not the gleaming future where humanity has learned to work with nature, but one where we’ve destroyed it. It’s not one where everyone’s standard of living has increased through diplomacy, commerce, and cooperation, but one where war is the norm and killing is a prized survival skill. It’s not a future where democracy and freedom reigns, but a militaristic dictatorship where independent and creative thought is suppressed.

The movie’s heroin recounts a story her father told her. Two wolves were fighting. One represents optimism, one pessimism. Who wins? The answer: The one you feed!

In the movie, the key to a wonderful future is to find and support the imaginative young people who are optimistic about the future in spite of all this negative input. We encourage this way of thinking in our entrepreneurial college audiences. We need to support and encourage these aspiring young entrepreneurs with their far-reaching imaginative ideas to solve the world’s problems. Remember, the Star Trek communicator became the flip phone and smart phone of today. Dick Tracy’s video watch became the iWatch of today.

We hope this movie will give Hollywood permission to portray the future as bright and amazing with a wiser civilization that focuses on health, wealth, and creativity; a civilization where the environment has been saved, and mankind has made exciting strides in medicine, space exploration, and clean energy.

Now, before you dismiss this as unrealistic, over-the-top, or Pollyanna, consider how much more likely a positive future is if we feed the right wolf.