Can the Kids Save the Environment?

THE RIGHT TO LIFE 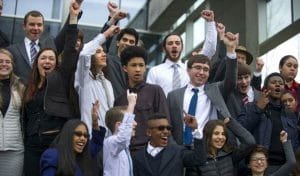 Do children and young people have a constitutional right to a healthy environment? Is the government liable for promoting fossil fuel production and greenhouse gas emissions that accelerate climate change? According to the Washington Post, a pioneering lawsuit being brought against the US Federal Government by 21, 9- through 20-year-olds is claiming exactly that.

Interestingly, the lawsuit was originally filed under the Obama administration. In November of 2016, the lawsuit cleared a major hurdle, thanks to U.S. District Judge Ann Aiken, who denied motions filed by the government and the fossil fuel industry to dismiss it. She so ordered that it should go to trial.

“Exercising my ‘reasoned judgement,’ I have no doubt that the right to a climate system capable of sustaining human life is fundamental to a free and ordered society.” – U.S. District Judge Ann Aiken

This is major! It could disrupt the way environmental advocacy is being conducted globally. Already in the Netherlands, a court hearing a similar plea ordered the Dutch Government to reduce carbon emissions by 25% over a five-year period. Other analogous lawsuits are being brought in South Africa, Austria, and Pakistan.

So, the crux of the issue boils down to whether it can be proven in a court of law, that human activity and burning of fossil fuels in fact causes climate change. Unlike politics, where you can have 99% of the scientists agree that human activity causes climate change, and still say “It’s a debate,” in a court of law, a preponderance of facts still matter.

Julia Olson, chief legal counsel for the plaintiffs and executive director of the advocacy group, Our Children’s Trust, said “Destroying evidence is illegal and we just put these new US Defendants and the Industry Defendants on notice that they are barred from doing so.”

The new administration especially does not want this to get to court where a decision will be based on the facts. That’s why they have filed a motion to stay litigation and appeal the district court’s decision to clear the lawsuit for trial. They know that if this gets to trial and the plaintiffs prevail, like they did in the Netherlands, they could be ordered to reduce emissions whether they wanted to or not.

Unbelievably, the government’s argument against preserving the critical documents that could prove the relationship between the burning of fossil fuels and climate change is that it would put an unnecessary burden on the government just to maintain these files that already exist!

We support the children and young people who are taking this novel and noble action. We put our faith in the court system which must decide on the facts. Let the court end the “debate” and demonstrate its counterbalancing power to help future generations avoid catastrophe. Even a reluctant government would have to execute a court order. Find out more about this landmark lawsuit at Our Children’s Trust.