Can We Get What We Want by Taxing What We Don’t Want? 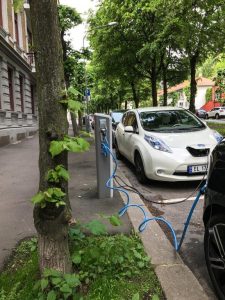 As of the New Year, 2018, Norway will have registered more new electric cars than new gas-powered vehicles. This is amazing because Norway is a major petroleum producer and exporter. What do they know that we don’t know?

So what’s the rush? And why subsidize electric vehicles when they have so much petroleum – and it’s such a large part of their GNP?

A majority of Norwegian voters believe in this principle: Don’t tax what you want and tax what you don’t want. So, if you are concerned with your health, and the health and welfare of your children, for instance, tax carbon and don’t tax carbon neutral transportation.

In Norway most electricity is produced by hydroelectric power. So cars running on that power are truly carbon neutral. Electric cars buyers pay no import tax or value added tax, thus reducing the purchase price by thousands of dollars, making them even more affordable right from the get go.

As we like to say, “If you want to make a change, put a buck on it,” or, in this case, a Norwegian Crown!

Simply stated, the Norwegian government has made it cheaper to operate an electric vehicle in order to reduce emissions, improve health, and help to reduce the cost of future electric vehicles by providing such a large customer base for them now. These measures have created a growing market for electric vehicles.

Even though Norway is a big petroleum producing country, they know it isn’t sustainable for several reasons. The resources are being depleted. The proof that burning carbon creates an unhealthy environment is undisputable. The catastrophic effects of climate change due to carbon emissions will bankrupt governments, insurance companies, and businesses alike.

In other words, they know the future is not in petroleum and they are changing their ways today to do something about it. They are not willing to idlily stand by waiting until the time comes when they are forced to change. They want to lead the charge!

This is an interesting contrast to our own country where we have ceded oversight and control of environmental protection and natural resources to the oil interests. In fact, currently in the US, many of these top government positions are held by oil company supporters.

While little Norway leads the way, we here is the US have allowed an “oiligarchy” to dominate our government.  Naturally they will remove subsidies for any power generation that competes with their oil interests. Naturally they will make conducting business as an oil competitor more difficult, and give more breaks to oil producers. As businesses and private citizens, we will pay the consequences which Norwegians are trying to alleviate.

Like any new industry, getting up to scale is the ultimate answer for the electric car industry. They need to compete pricewise, range-wise, and maintenance-wise with gas powered vehicles. The Norwegians believe subsidies and tax breaks are only a temporary step to allow the industry to pass on eventual efficiencies of scale that will make those allowance unnecessary.

They believe that soon, these alternative vehicles will simply cost less, even without the tax breaks. They believe the tax breaks are a wise short-term investment when compared to the incredible cost of climate change on the infrastructure and human health.

We can learn something from the Norwegians? The sooner all of us follow their lead, the better prepared for the future we shall be.