Greed Kills! Take Back Your Power! 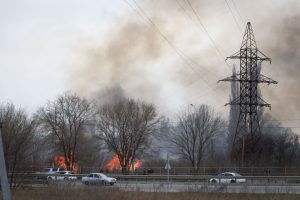 Can you imagine a big utility company deciding that undergrounding high voltage power lines was too expensive and then having to pay out billions in damages as a consequence of those powerlines sparking fires? It was obviously cheaper in the long run to take those and other safety precautions. Meanwhile, stockholders were paid dividends with funds that should have been used for safety retrofits, all apparently with governmental approval.

Now add to that aging and poorly maintained infrastructure a climate crisis where hot, dry winds suck out the moisture from the woodlands and historically high winds blow down the power lines. Now you have a perfect storm of weather anomalies, poor judgement and corporate selfishness that have orchestrated yet another catastrophe in California. This is the third year California is suffering from the physical effects of denial, greed, and poor oversight by our energy company, PG&E.

The climate crisis has exposed residents and businesses to the price of shortsighted government, corporate hubris, and monopolistic dependencies. Did they actually think that they could postpone safety measures indefinitely, and without consequence? Were they in such denial of the climate crisis that they thought they could get by with a 100-year-old system standing in a 21st century climate? Didn’t they see the folly of their ways in 2017? And 2018? Well then, 2019 could not have come as a surprise.

We have written before about the dangers of utility monopolies and how their behavior can render us helpless against their power. Now we gotta do it again…

Where we live in Sonoma County, our power was shut off because at this point, it’s all the power company can do when the wind picks up. However, they didn’t even do that right. Evidently, a segment of the line was still live and failed, causing yet another catastrophic fire this year! 20 miles away from the fire, we were evacuated because the fire was being driven by unprecedented 90 mph winds that were blowing burning embers miles in front of the fire. Businesses were closed and life was disrupted. As of October 29th, the fire was bigger than the Sacramento city limits and still threatening major population centers.

Interestingly, last week, before the fire, we went to see the movie, Current War where the three grandfathers of our modern electrical age, Edison, Westinghouse, and Tesla, all vie for power, literally. Edison wants Direct Current (DC) power generated locally and delivered underground to neighborhoods. Westinghouse wants Alternating Current (AC) power generated centrally and distributed in a vast network of overhead wires. The Tesla AC motor cinches it for Westinghouse’s concept and we get huge, vulnerable infrastructures.

Fast forward 100 years and all of a sudden, the idea of Edison’s underground micro-networks is starting to look like a 21st century solution. Whether it’s solar homes with batteries, locally produced micro-grid power from wind, solar, batteries, or fuel cells, the idea of cutting the cord from the utility company has never been so compelling. Are we really going to try to save a giant cumbersome grid that has now proven dangerous and beyond regulation? Or are we going to disempower these big monopolies and decentralize power production and delivery?

Meanwhile, we are the beneficiaries of an army of heroic firefighters here from all over the country who have so far saved thousands of lives and homes, including ours! In all this mess, it’s really great to see these firefighters and first responders coming together, regardless of their own political, social, racial, or religious differences – simply as Americans with a job to do. And they are doing it!!

Thank you, firefighters! Let’s all rethink how we allowed them to get in harm’s way and take action on how we get the power we need! Three years of major fires should have taught all of us that changes are required to protect our future here in Sonoma County, in California, and in the world. Take care. Be safe.