Is Tech Dumbing Us Down and Making Us Vulnerable to Mob Rule? 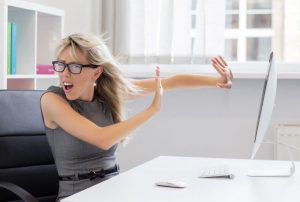 As a result of ever-present information sharing technology, are we losing our freedom? According to Thomas Jefferson, we are moving in that direction! “If a nation expects to be ignorant and free, it expects what never was and never will be,” he said. “If we are to guard against ignorance and remain free, it is the responsibility of every American to be informed.” By “informed” he meant well informed about the truth of matters, not just blasted with information coming from unreliable sources.

We may think that all this access to information is making us smarter, but isn’t it just dumbing us down with over-generalized sound bites, sensationalized headlines, and simplistic explanations? Just having access to information doesn’t make us smarter. There needs to be a learning process that involves deductions, analysis, and validation in order to improve our intellect.

In the last election, we had two candidates, one at each extreme of the political spectrum. Each one addressed two very different crowds. But what both crowds had in common was a simplistic view of what the president could do legally. And it was wrong! Neither candidate could actually deliver what they promised without breaking the law. Nonetheless, both candidates got votes …and one got elected!

Why? Is it because we’ve grown so impatient that we want simple answers that sound good to us and we don’t know enough about how the government works to realize they are impossible to execute?

Are we now living in a country whose citizens think that they are voting for a cure-all candidate who can exercise extra-legal power to “get the job done”? If so, what’s to stop future candidates from pandering to this uninformed “populism?”  As long as we don’t make knowledge of basic Civics a requirement, nothing!

Many folks who preferred a candidate who was not on the final ballot simply didn’t vote. They were not willing to cast their vote for the “lessor of two evils.” “That’ll show ‘em!” they may have thought – But without their vote, they got 4 years with the “greater of two evils.”

Hostile governments know what Jefferson warned us about. They know that we are likely to take action without fact checking. That’s why they spent millions on Facebook ads and tweets. They know the ads and tweets will get passed on before they are verified. Why? We’ve become impatient and want simple answers fast! This enables them to spread distraction, polarity, and chaos. This enables them to divide and (possibly) conquer.

The evidence is mounting that US election, the Brexit vote, and the Catalan succession votes were all at least influenced by foreign ads that played on simplistic cure-all themes.

Most of the world’s democracies are parliamentary systems where the prime minister is elected by the legislature, not directly by the people. So, to change government you just vote for the opposition party so that you can presumably cause a vote of non-confidence and form a new government, more to your liking. But in practice, fragile coalitions must be formed because the multi-party system may not allow a clear majority in those legislatures.

In the US, our founders wanted to allow us the ability to vote for legislators of one party and a president of another. The problem is, however, that the decision you make on election day lasts 4 years! Even more reason to have an educated population.

So, if this sounds like a plea to bring back Civics class, it is – to save our democracy, to save our economy, and to save what really makes America great, diversity!