"ASK WHAT YOU CAN DO FOR YOUR COUNTRY” - JFK 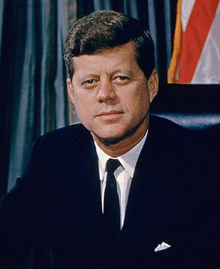 This week we remember the assassination of John F. Kennedy, one of our most popular presidents and one of our youngest presidents. He was elected by a razor thin margin of the popular vote, but quickly united a divided nation. Kennedy’s dashing image, eloquent speaking style, and international popularity couldn’t help but gain the respect of the most ardent critics of the time. Elected in 1960 and assassinated in 1963, he spent only 1000 days in the White House, yet he demonstrated a timeless strength so sorely in demand today – Leadership ! Leadership is commonly defined as “a process of social influence in which one person can enlist the aid and support of others in the accomplishment of a common task.” That was one quality for which JFK was known and admired.

Today, with the international space station, commercial space vehicles, and our almost total dependence on satellite communication, it’s hard to believe there was ever a time when our country could not even get one satellite into orbit; a time when Americans had to watch in embarrassment as our rockets blew up on their launch pads or veered off course and had to be destroyed; a time when the Russians (then the Soviet Union), were boasting about having the first and only successful satellite in orbit. Such was the landscape of national humiliation when John Kennedy took office.

In 1961, shortly after becoming president, he called a joint session of Congress in which he declared that the United States was going to land a man on the moon and bring him safely back to earth before the end of the decade. Imagine the courage, vision and downright boldness that must have taken at that particular time. He went on to say that achieving this goal may in many ways held the key to our future on earth. How right he was.

Kennedy gave all Americans hope and a goal at a time when they needed it. Even though he was not there to see the first man step on the lunar surface, the country he inspired accomplished it – and even beat the timetable! His leadership returned purpose, confidence and pride to the American people.

Given the circumstances, many would argue that he had no business stating such a steamily unreachable goal – but it was just that, the difficulty of the goal, that sparked the country’s imagination, united the nation, and challenged them to show their stuff. This was true leadership. As Dr. Martin Luther King put it, “A genuine leader is not a searcher for consensus but a molder of consensus.”

His appeal was based on lofty goals, bold moves, and his ability to communicate his confidence in the country’s capacity to overcome big challenges. When a leader says, “I believe you can do this,” he’s enlisting the pride of his followers and demonstrating his faith in their abilities. We could all do well to remember what made him a such great president and apply his style of leadership in our government, on Wall Street and on Main Street today.

This week let’s not focus so much on those dire events in Dallas on November 22nd 1962, but on what Kennedy had to offer the country and the world: A valiant, charismatic leader who improved our lives with bold challenges and faith in our abilities.