Key Battle In WWII Is More Than Just Another War Story 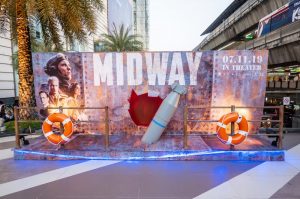 Edmund Burke (1729-1797) said, “Those who don’t know history are destines to repeat it!” No truer warning could be given today when history studies have taken a back seat to technology, when apathy and disempowerment is on the rise, and when classic lessons are viewed as “retro.” Are we about to repeat the mistakes of the past? Are we so distracted by constant input that we fail to see history as a top priority deserving of our attention?

Unfortunately, the movies seem to be our only link with the past and the many lessons learned the hard way. Most people’s only link with the past is through period movies and series. On Veteran’s Day this year, we decided to see the new movie, “Midway” about the crucial battle that was the turning point in the War in the Pacific during WWII. It was an extended air and naval battle near Midway Island. If the Japanese won, they would take the island and be in striking distance of Hawaii and the West Coast cities.

It is an extremely timely, realistic, and well-acted true story of a battle that needs to be remembered, not just to honor the many veterans who lost their lives, but for the national mentality that allowed it in the first place. It’s a mentality that is gaining again in popularity and can lead to a repeat of history.

Sure, it’s a war story with lots of combat scenes in the air and on the seas, but unlike many of its predecessors, it conveys the real consequences of a country isolated and insulated from the world, steeped in nationalism and isolationism that suddenly finds itself woefully unprepared to fight for its own survival. It’s a country that has disengaged from despotic military campaigns in Europe and Asia, thinking erroneously that, “It’s their problem. It doesn’t affect us.” And that attitude actually gives permission to those aggressions to multiply and accelerate. The country with that mentality was our country, the United States of America!

Of course, the big wake up call for the US was the surprise attack on Pearl Harbor that destroyed most of our Pacific fleet. Shocked and scrambling to respond, we fought back with green and unprepared pilots using antiquated aircraft to take on a polished and well equipped enemy. We quickly lose half of our fighters because of old and poorly maintained equipment, and not enough time for adequate training.

This is an insightful movie because it is transparent about the deadly effects of apathy and national isolationism which currently are on the rise. For all the losses it shows, this is not a movie about a glorious victory. It’s more about sacrifice, luck, bravery, and successful strategy in the face of overwhelming odds.

At one point during the movie, a Japanese captain notices the way that the unprepared American pilots are executing a bombing run on his ship and says, “Look at the way they are lining up. They must be amateurs!” and then adds, “ But even amateurs can get lucky.” Later in the movie, after another attempt, a Japanese commander says, “We are lucky they don’t have better equipment!” For Americans who think war is glorious or that we are invincible, it’s a shocker to see the effectiveness of the Japanese anti-aircraft with 5-10 American fighters falling into the sea in flames.

Yes, we ultimately win the battle, but at a huge price! This movie is a wakeup call to those Americans who did not have parents in the great war and who may take peace and stability for granted. It is a history lesson we don’t want to repeat. The lack of US leadership on the international stage, the permission we gave the despots, the false belief that we would not be affected, and the utter unpreparedness our self-deception allowed, all lead to the loss of many lives on all sides.

Today, we are deceiving ourselves about the accelerating climate crisis, rising despots, failing governments, and the wistful idea that if we ignore them, we won’t be affected. Go see Midway for a sobering dose of realism, history, and hopefully a warning to either bring back history lessons or be doomed to repeat it!