Solving One Problem Can Lead to Another 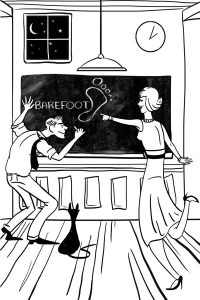 Folks find it hard to believe, but even though we created a monster wine brand, we weren’t from the wine business. In fact, we didn’t even drink wine. It seemed so presumptuous, snobby, and exclusive. So how did it happen that two folks who didn’t appreciate wine wound up in the wine country and in the wine business?

Bonnie was from Portland, Oregon, and Michael was from Oakland, California, and in the short term of their upbringing they had witnessed their respective cities get more developed, with infilling, congestion, and encircled with a seemingly endless horizon of suburbs expanding in all directions. Where there used to be forests, creeks, and farmlands, the cities’ natural surroundings were rapidly transforming into strip malls, subdivisions, and freeways. Where we it used to be able to walk into nature, now required a substantial drive.

It’s not that we didn’t like the city and city life, it’s just that we yearned for a part of our past that was no longer there. We independently found that place in Sonoma County, California. Here were rolling hills, redwood forests, oak woods, creeks and meadows – just like we remembered growing up, and all relatively close to San Francisco. Here was the Russian River, the Pacific Ocean, and the Sonoma Coast parks and beaches. But here also was the wine industry with thousands and thousands of acres under cultivation.

Was it any wonder that we were both sucked into the vortex of the wine business? At first it was innocent enough. Bonnie, with her background in organization, helped grape growers and wineries with office management and oversight. Michael, with his background in public administration, helped wineries deal with the government regulations, permits, and licenses.

Although we were on separate tracks, we were destined to meet. That happened one spring night at a small dance club that featured another one of their common passions: rhythm and blues oriented rock and roll. It was before Hip Hop. It was before Grunge. And it was before Disco. And it was live! It was loud! It had horns, and it was danceable. In those days, couples dance together. So, we met, we danced, and the rest is history.

Today when we are asked how we succeeded as a couple in business, we start off by saying, “Kids, don’t try this at home!” Aside from the initial period of adjustment (2 years, for us), we found that even though we had much in common, the differences we had gave us a well-rounded skill set to tackle the unknown, which is exactly what we were about to do.

Within a year, Bonnie noticed that her grape growing client hadn’t been paid for his grapes – for three years! So, she sent her new boyfriend, Michael, on an errand to go collect the funds! Michael only wondered a little what he had gotten himself into. When he arrived at the winery that owed Bonnie’s client the money, it had just declared bankruptcy! Now what?

Using his skills, he negotiated a trade for bulk wine and bottling services in lieu of cash. They thought they had solved the challenge. But the challenges had just begun! Now what?

In order to get the cash to pay the debt, they had to convince Bonnie’s client to go into the bottled and labeled mercantile wine business. He was already in the grape growing and winemaking end of the business and realized he could not take on yet another challenge! Now what?

So, they figured, instead of working for Bonnie’s client, they would take on the debt themselves along with the responsibility for the marketing of a branded wine product. This was the beginning of a seemingly unending string of “now what’s.”

And that’s the point. Entrepreneurship is an adventure with daily challenges and roadblocks that must be overcome in order to just continue the adventure. Sometimes those solutions are hidden and take days and even weeks to solve. Sometimes you ask everybody for solutions and cast about in all directions.

And sometimes, after a ton of input from well-meaning contributors, all that information and advice suddenly gels and it hits you like a bolt of lightening in a flash that is so fleeting that you must stop whatever you are doing and capture it right then and there before it fades.

Such was the case with the most well-known wine label in the world. It came in a flash. Bonnie couldn’t contain herself. She was suddenly aware of what the label looked like. She had to get it down fast and refine it later. In entrepreneurship, you must be open to the amazing power of the human brain to sort, compare, contrast, and solve, even when you are sleeping or working on something else. Then suddenly, without warning, surprise! Problem solved!

An other great message demonstrated by this chapter is how to find and use strategic allies. Today Michael and Bonnie challenge their clients with the basic question: “Who gets rich if you get rich?” Seems odd on its face, but upon deeper inspection, it unlocks the door to the very folks who want to see you succeed. But where are they?

Bonnie found her greatest strategic ally in her accounts payable list. It was the bottling supplies company, the one that supplied the glass, corks, foils, and cartons. They could sell more supplies to a low-priced, high-volume product than a high-priced, low-volume one. They wanted her to succeed. And so, they provided tons of information, advice, and direction, including important production and packaging choices, legal requirements, and cash flow planning.

Successful entrepreneurship requires a certain mindset, one that recognizes that it is really all about problem solving.  One that says if I engage a set of principles, like a sea captain engages maps, radar, sonar, weather projections, wind direction and speed, currents and swells, I will make it to port. Like the sea captain, you don’t know what you will be up against, but you have mitigated the risk with those  guiding principles. Asking for help in the face of adversity, engaging your strategic allies, and keeping your mind open for solutions your brain has been working on, are a great start.

Build and inspire your team with the positive results you seek. They will help you get there!  And as you proceed along the journey, you don’t have to give up on your passion to pursue your opportunity. Bonnie and Michael found a way to use their business to promote their passion for nature. Follow your opportunity …Passionately!

Please enjoy Chapter 1 as our guest and see if you want to join us for the rest of the adventure!