Stress and Bad Examples are Influencing Us to Act Like Deplorables 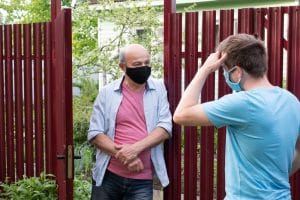 What separates us from mob rule is a lawful society. Simply, it is the concept of “innocent until proven guilty.” But is that concept getting eroded away by baseless claims on social media and political movements fueled by unproven conspiracy theories? Is the frequency of hearing these “untruths”  becoming more influential than the truth?

Michael’s dad used to joke, “My mind is made up, so don’t bother me with the facts!” Is this the attitude we really want from the folks who are accountable for much of our economy, health, and welfare? And beyond that, is that attitude starting to present itself in family, friends, neighbors, and co-workers who are already understandably stressed?

Action, in the form of acting out, lashing out, and animosity, cannot be justified by false assumptions.

As a species, we are copycats. “Monkey see, monkey do.” And this is why leaders in every walk of life must appeal to the most positive aspects of our human personalities, and not the most negative ones. What we see in the behavior of leaders and social media sensationalism can easily be incorporated into personal behavior. Some think, “It’s OK to behave like this. It’s OK to have snap judgements and act on them. It’s OK to think I am a victim.” But it’s not OK!

Are we being given permission to revert to mob rule by some leaders and certain social media? And are we copying the behavior we see from those negative influencers?

Recently, we witnessed a person we have known for 20 plus years suddenly overreact to, as it turned out later, an innocent misunderstanding. In fact, the “offending party” was actually looking out for this person’s welfare. But, because of assumptions the effected person made about the motive of the “offending party’s” action, everyone within reach was scolded and accused of being “unfriendly.” This person saw themselves as a victim and their mind was made up.

Symptoms of the Times

We think this type of behavior is on the rise because of the stressful times in which we live. Now is the time when we have to summon up empathy and forgiveness. It’s easy to escalate when accusations are made in the heat of the moment. It’s hard to overlook words that hurt feelings. But when we put it in perspective and take the high road, we can preserve long-term relationships that are much more relevant than a hot-headed exchange. The benefits of maintaining the relationship include security, economy, and health, not to mention companionship and community support.

Realize that all of us, including family, neighbors, friends, and colleagues, have been without the good examples of decorum and decency from the most popular social media and the highest levels of leadership. Too many of today’s top leaders are appealing to the worst aspects of human nature. And even though we may abhor that behavior, we are certainly influenced to emulate it. For instance, some folks hate their parents so much, they become just like them. Leaders and media can have the same effect.

After many years in sales, dealing with many types of personalities all under various degrees of stress, we were still successful in business by subscribing and applying six simple rules when confronted with negativity:

As the quote often attributed to Gandhi says, “Be the change you want to see in the world.” It’s the right thing to do for all of us, which includes the good folks under pressure. After all, as the popular current phrase accurately states, “We are all in this together.”